Presenters of the award, Faye Dunaway and Warren Beatty had no idea of the mix up – but now, the public understands why Beatty acted the way he did when reading the result to the people in Dolby Theatre. He noticed something odd with the card as the world watched, anxiously awaiting to hear who had won. Beatty was seen glancing down at the card twice, he then checked the empty envelope to see if there was anything else inside – the audience thought he was trying to build suspense. Continuing on, he went on to say “And the Academy Award”, with a brief pause looks down again as the audience laughs, “for best picture”, as Faye pulls the card from his hand and said, “La La Land”.

Everyone clapped, there were hugs, cheers, and crying, while they all approached the stage to accept their award – meanwhile behind the scenes the crew knew it was a mistake. Surprisingly it took about two minutes for behind-the-scene workers come on the stage and verify that they were in fact not the winners of Best Picture. To lighten the mood, Jimmy Kimmel approached the microphone and said, “Personally I blame Steve Harvey for this”. Steve read the wrong winner for the Miss Universe Pageant in 2015, causing the wrong person to be crowned the winner.

As it turns out, Warren and Faye were handed the incorrect envelope. Warren went on to explain why he had paused for so long, the card he had in his hand said: Emma Stone, La La Land. As you can see, the envelope does not say ‘Best Picture’ but in fact says ‘Actress in a Leading Role”. This could have happened because the Academy produces two copies of the envelopes and cards, as they have PwC accountants positioned on both ends of the stage that hand out each card, depending on which side the presenters enter from – requiring them to have two sets. 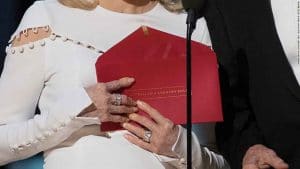 Twitter was quick to point the blame at Leo DiCaprio, as images surfaced showing him holding the envelope rather than handing it to Emma Stone. However, Emma Stone was quick to respond in a post-Oscar interview, which at the time it was not known that they have a number of copies backstage, saying that she had the envelope the whole time. She even called this the “craziest Oscars ever”.

In the following video, you see Leo DiCaprio holding the card the entire time.

However, it is good that the crew was able to identify the problem quickly, even though most of the individuals already said their thank you speeches. In addition, it is also further proof that anything can happen on live TV.